RICH
Here I am in a nutshell: an inveterate foodie, craft beer aficionado, cigar saveur, wine lover, food writer and serious cook. And now I'll try to share some of my experiences and observations with you.--Rich Pawlak

A SLICE of Pure Pizza Bliss 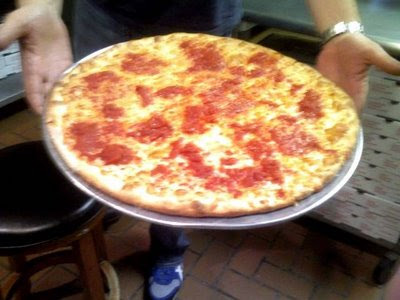 So it was the kids and I with about four hours to kill in Center City Philly. Of course they fell asleep en route, which made it easier for me to cruise Center City, Bella Vista, Washington Square West and check out all the new places that have cropped up in the past year. It's been a loooong time since I've been able to spend any time in the Italian Market area, and it's just amazes me how many Asian and Mexican places are all around now. I've been away too long. $1.50 tacos all day on Tuesdays at La Lupe! Damn, the kids are still asleep. So I start my search for Bebe, the new 'cue spot on 9th St. And I CAN'T FIND IT!
I did find myself on 10th St. at some point, and watched the sad spectacle of Shank & Evelyn's being emptied out, a small forlorn crowd watching from across the street. God, I used to love that place. I'm sure Center City denizens will be glad when they re-open on 15th St near Sansom, but I also drove by that storefront later in the day, and it looks like a dreary little location. Maybe Ev knows something we don't.
Tried to check out the soon-to-reopen (nee Sansom Street) Oyster House, but it was covered in plywood, concealing all the interior construction.
While I was on 10th St. though, I did drive by SLICE, the raved-about pizza joint (10th & Federal, 215-463-0868), but it was yet to open. Parked across the street in front of Bitar's Bakery and scanned the newspapers I brought along, picked up the Jim Rome Show on a radio station in Wilmington, DE, and relaxed and chuckled while the kids slept. Felt like a pizza place stalker. And I was.
Within a half hour, a neon "OPEN" sign flashed on; soon we would be in business. And not soon after that, Sophie wrested herself from slumber and said the magic words: "Daddy, I have to pee." That woke Ben, conveniently enough, and giddily we walked across the street for pizza and potty breaks at SLICE.
Owner Jason Dilks was already taking orders for delivery over the phone; we quickly ordered 3 slices and found the restrooms, which led us througn the entire kitchen area where 3 other workers were chopping mounds of basil, shredding cheeses, stirring crushed tomatoes. Glorious. 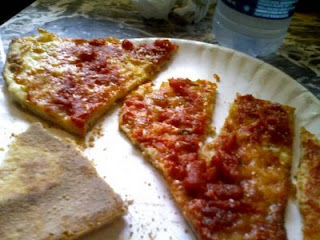 With my eyes closed (or you can check the photos yourself), it was scarily close to a Delorenzo's of Trenton tomato pie. And Dilks should know; he grew up eating the stuff, and he thinks it's still the best pie in the US. Appearance-wise, he doesn't burn the crust quite like a Trenton tomato pie, but he has the flavor profile down pat. Ben and Sophie scarfed down their huge slices (we had to cut them up a bit, Jason serves a very large slice), because, like their dad, they know what the good stuff tastes like; they go ga-ga for Delorenzo's.

We chatted pizza for a while, joined by some neighborhood residents and a pressman from the Inquirer who stopped in for a slice: a random room full of pizza geeks at 3 in the afternoon.

Jason's pie is nicely thin crusted, without the random bumps and odd shapes common to Trenton pies, but the bottom was nicely charred, and the flavor was nutty-yeasty-smoky, the texture chewy. The way it's supposed to be. It's a great homage to the pizza of his youth.

And he is looking into opening a branch of SLICE in Center City. Oh you lucky Center City bastids. Jason is gonna change the way you think about pizza, and you will be spoiled forever.

Dilks says he makes a mean white clam pie, too. Guess which pie the kids and I will be trying on our next visit? Along with a traditional red, I mean. You can never get enough of pizza this good.
Posted by RICH at 1:25 AM

I wish somebody who does pizza like that would move to Daytona Beach and start the business.
Email me when you get a chance... update me about you & the kids.